Let’s save the colours of the sea

Let’s save the colours of the sea 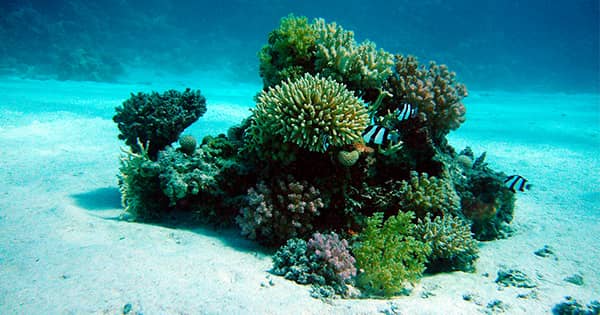 At the beginning of the COVID-19 pandemic, there was talk of the great respite that was benefiting the planet with the mandatory quarantine. All over the world there were animal sightings in places as unsuspected as the big cities. Unfortunately the situation never really changed: human beings continued to pollute. Now the pandemic is represented with sad images of rivers and seas full of badly discarded masks. These residues diminish the quality of the waters and suppose serious repercussions for the species that inhabit the seas, among them the corals.

Corals, or coral polyps, are organisms that build communities called reefs. Fish, starfish, sponges, sea urchins and many other species coexist here, all of different colours and shades. For the construction of the reefs, the polyps are anchored to the rocks of the seabed where they reproduce and group for thousands or millions of years to form the wonderful reefs.

Corals have within their tissue algae, which carry out photosynthesis and supply the coral with oxygen, food and its peculiar and striking colours. In turn, corals provide them with nutrients, carbon dioxide, and protection.

Although they occupy only 1% of the oceanic surface, the reefs are so biodiverse that almost 25% of the marine species discovered inhabit them. In this biodiversity lies the importance of keeping them safe; however, like the rest of the planet, reefs have been highly threatened by global warming and pollution.

Destruction of the reefs

According to a note published in 2019 by the newspaper La República, around 40% of the coral reefs have been lost in the world. In Costa Rica the reduction reaches a worrying figure of 85% in the Gulf of Papagayo. This situation has effects not only on the biodiversity of species, but also generates losses in the protective barriers of the coasts that prevent erosion, as well as a decrease in the food we consume from the sea.

Coral losses occur when polyps are subjected to stressful environments, such as increased temperatures and acidification of the seas. This stress causes the polyps to expel the algae, thereby losing their food source and entering a bleaching process.

The colour of corals is directly related to their health. A coral under constant stress conditions turns white because it expels all the algae that inhabit it, which causes the loss of its food source, its death and finally the disappearance of the entire reef.

On July 30, 2019 Decree 41774 “Promotion of restoration and conservation initiative for the recovery of coral ecosystems” was signed. This decree aims to reduce acts that harm reefs and promote actions that protect them, such as the cultivation of corals.

Just as trees can be cultivated and grown, corals can also be reforested. Since 2016, the Centre for Research in Marine Sciences and Limnology (CIMAR), together with students and scientific researchers, have analysed the cultivation of corals outside and inside the sea.

The culture of corals in laboratories is an initiative to accelerate the growth process of coral polyps. According to José Andrés Marín, a UCR student and member of the Raising Coral Team, this research has made it possible to reduce growth times from 15 to five years.

Cultivation techniques vary according to the species of coral. One of them consists of placing a tree-shaped PVC and fiberglass structure in the sea. Coral fragments measuring between 0.5 and 1.5 cm2 are hung on the branches of this “tree”. Once the corals reach certain dimensions, they are transplanted to rocks on the seabed to reforest the reefs little by little.

Considering that cultivation techniques are not as simple as planting a tree, there are other actions that can be taken to protect corals. For example, avoid buying live corals and ensure that the fish have been sourced sustainably. Rivers and seas must be kept free of liquid and solid waste. The use of blockers with oxybenzone, which causes coral bleaching, can also be changed to blockers with titanium oxide or zinc oxide.

To keep global temperatures constant, including those of the sea, it is important to encourage activities that reduce climate change such as the use of public transport or bicycles. There are many other actions, however the most valuable is to spread the word: the population takes care of what it knows.

Thanks to all the policies implemented and the creation of awareness in the Costa Rican population, great strides have been made in protecting forests. Now it is necessary to focus efforts to protect reefs as well. This is how we would save the colours of the sea.