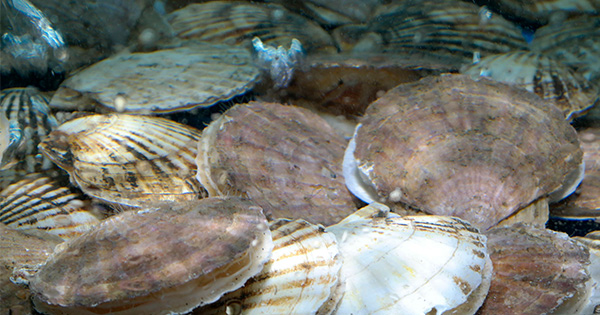 In May 2020, the newspaper La Vanguardia reported that eight clams are responsible for monitoring contamination levels in an aqueduct that supplies eight million people in Poland. The peculiar system implemented by the Warsaw Municipal Water Department consists of placing these eight clams at the entry of the water system, with a mechanism attached to the shell.

Clams are indigenous to the river whose waters the system captures. Their shells are kept open while they filter the water and feed and close when detecting toxicity levels. The movement of the shells activates the mechanism on their shells. When activated by more than one clam, this mechanism automatically cuts off the water supply.

This peculiar system seems to come out of The Flintstones, that popular television series in which cave people substituted animals for machines that could fulfill the same function. It is possible that, in the 60s when the series was released, this concept was seen as an ideal absurdity to include in a children’s series. However, the Warsaw Clams, among many other possible examples, show that the Flintstones technology was not absurd but visionary. That series went ahead by showing us what we know today as biotechnology.

Biotechnologists assume that no one does things better than nature, so they develop technologies that take advantage of nature rather than imitate it. Biotechnology is a term made up of the words: bios (life), tecne (skill) and logos (science).

Bioremediation refers to processes that take advantage of the capacity of certain organisms in soils, rivers or seas, to clean them when they are contaminated. It is possible to say that bioremediation is a kind of poetic technology, which has been suggested by nature to amend the errors caused by strictly human technologies.

The art of choosing

There are many ways to solve environmental problems through bioremediation. It can be used to clean rivers contaminated with sewage or to clean floors contaminated by fuel spills, for example. It can be applied using plants, fungi or bacteria.

Obviously, the range of organisms available is wide. The true success of bioremediation is based on knowing which organisms to choose and understanding that a certain technique cannot be applied in all cases.

Let’s think that you want to apply a type of bacteria capable of cleaning the water in a contaminated pond. Let’s also think that this lagoon has so much organic matter that has consumed most of the available oxygen that the bacteria requires to live. In that case, even if it is a very efficient bacterium, it will not be able to survive in the lagoon and the bioremediation will not be effective. Something similar will happen if we have a group of bacteria that adapt perfectly to the environment but are unable to degrade the pollutant.

Therefore, although the repertoire of techniques is wide, many factors must be considered when choosing a technique. Some of them are: the type of pollutant, the remedial organism to be used, its ability to degrade that pollutant, the organism’s ability to survive in the contaminated environment, the number of organisms required and other technical factors such as the need for infrastructure to your application. For example, the proposal could be economically unviable if it requires wells that increase the cost of the project.

One of the areas in which bioremediation is most applied is the treatment of soils contaminated by hydrocarbons. Hydrocarbons are a recurring pollutant due to their wide use and distribution.

Bioremediation has gradually replaced common remediation practices, which consist of removing contaminated soil and transporting it for incineration. This practice not only produces negative effects due to the generation of smoke that affects the environment, but also because it releases part of the pollutant that was originally in the soil into the air.

On the other hand, bioremediation that uses microorganisms such as bacteria, allows a gradual degradation of hydrocarbons producing only water and carbon dioxide as waste, thus obtaining a less expensive process from an economic and environmental point of view.

There are several principles of bioremediation. For example, in Costa Rica a technique based on two concepts has been successfully applied: bioaugmentation and biostimulation.

Think of this technique as a birthday party in which the bacteria are the children and the hydrocarbons the piñata. Suppose that at the end of the party each child will have the opportunity to hit the piñata only three times. What are the odds of busting the piñata if we only invite five children? Very few.

Let’s think that those five children are the neighbors of the birthday boy or girl. In this case, they represent the bacteria that live in the contaminated environment and are known as autochthonous. There are too few children to pop the piñata, or too few bacteria to break down all the hydrocarbon that is present.

Now what if we invite all of the birthday boy’s cousins and schoolmates? The chances of busting the piñata will certainly increase. This is the concept of bioaugmentation. A culture with a high content of bacteria is prepared that is applied to the contaminated soil and helps the indigenous bacteria to break down the hydrocarbons.

On the other hand, if we invite more children, we do not want to bring the little ones who are scared and cry when it is their turn to hit the piñata. No: we’re looking for those who bite their lip and fan the stick no matter who gets in the way.

When choosing bacteria, those that attack the hydrocarbon most strongly must also be selected, and one must know where to obtain them. For example, lactobacteria, or lactobacillus, are a strain that can be found in the gastrointestinal tract of various animals. Its metabolic activity breaks down organic matter such as hydrocarbons.

Well, we already have several strong and aggressive kids at the party. The odds of breaking the piñata are high at this point. However, imagine that throughout the party these children consume ice cream, candy, soda, lolly pops and flakes. All that sugar will give them an excess of energy that they will discharge at the end of the party, ensuring that the piñata will burst.

This is, in short, biostimulation. When the bacteria culture is applied, nutrients are added that allow them to survive longer and energy sources that accelerate their metabolism to degrade hydrocarbons more quickly.

In the last four years, this combined bioaugmentation and biostimulation methodology has been applied in five sites contaminated with hydrocarbons. In all of them, a reduction in contamination of 99% was achieved in an average time of 4 months.

As we can see, bioremediation has proven to be a highly effective, sustainable and cheaper technique. Whether we’re talking about dogs detecting drugs at borders, bacteria cleaning soils in Costa Rica, or clams policing water in Warsaw, no technology is more effective than nature itself.