Taking care of the environment with care

Taking care of the environment with care 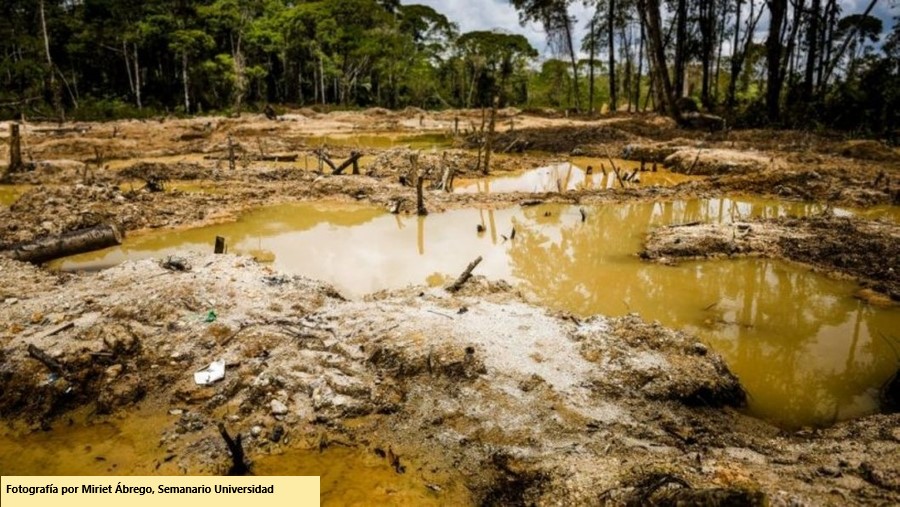 A good day, as usual, Fabio entered Facebook to get the latest news. After swiping his finger for a while on the screen, he saw a story that a friend had shared and titled: Gold Mine impacts our forest. The link to the note was illustrated with the image of a grimy hand holding a nugget and related how a part of the forest in his community had been cut to install a gold mine.

Fabio was outraged to see how they destroyed the forest of his community for something as ostentatious and insignificant as gold, and placed a resounding #NoMoreMining. Determined to know more about the subject, he continued to research in pages and environmental groups, being increasingly sure that not only gold mining, but also other minerals such as copper and bauxite, cause irreparable damage to our environment.

And so, with that news, was how the largest anti-mining movement ever seen began. Fabio attracted more and more people to his cause, and along with them, he fought to eliminate the environmental and social atrocities of mining. Little by little, the struggle paid off, and one by one, the mining companies of the world disappeared until there was not a single one left. Motivated by his victory, and an image of birds trapped in tar, he remained convinced that the next objective of his struggle would be the oil companies.

He went to his computer to organize the next march, but it did not come on. He then tried to access the internet from his cell phone and this did not work either. What Fabio did not know, is that gold, due to its durability and electrical resistance, is used as a conductor in microprocessors, without which its computer no longer worked. He also did not know that his cell phone battery was lithium and that by eliminating the extraction of this resource, he had also eliminated the power source of smartphones.

At least, this facilitated the work of Fabio and his group. Without computers, the oil industry, like all the others, would start to fall in no time. The effect was immediate, and most vehicles and transportation services stopped. But this did not worry Fabio since he had an electric vehicle. He climbed into the car, turned the ignition key, and a dull “tick” surprised him. From other countries, there were rumors that electric vehicles worked. Why his did not? This was due to the fact that in Fabio’s country, a large part of electricity continued to be generated from fossil fuels, and not from renewable sources.

The consequences of his movement began to worry him. “We must do the same,” he thought. “Let’s generate renewable energy, and everything will be worth it”. It turned out that his country, given its large number of volcanoes, had a high geothermal potential that could be exploited to generate electricity. So he took his great conviction and used it to solve the energy problem of his country through geothermal energy.

Laws, projects and investors. Everything was ready to make Fabio’s energy vision a reality. However, his environmental group came on the scene and stopped all the projects because the law defined that the volcanoes and their surrounding areas were national parks, within which it was forbidden to build. The environmental group, that had already taken a life of its own and acted freely, ignored Fabio’s explanations and, on the contrary, continued to veto all kinds of exploitation of resources.

Fabio wanted to convince himself that everything had been worth it, and with this in mind, he went to the forest of his community. When he arrived, he was horrified to see how people had already cleared the remaining trees. They used them as fuel and to try and recover at least one part of what was once their society.

Without graphite with which to write a complaint, he had to go in person to the government office and demand an intervention, to which he responded that the mining company that was previously there, had a contract that obliged it to mitigate the impacts it would generate, without mentioning that it had paid an environmental warranty that would be charged in case of any environmental damage. However, when the company left, all these conditions and warranties had disappeared, so that nothing could be done for the forest.

Although Fabio’s story is somewhat exaggerated, it illustrates not only the importance of the exploitation of natural resources in our society, but also the consequences of extreme environmentalism, and how its repercussions may even be worse than those it seeks to prevent.

The most recent mining veto in our country (Costa Rica), Crucitas, serves as a true and faithful example of how an extreme movement managed to stop and expell a mining project from the country, leaving a community at the mercy of illegal mining, with environmental and social problems still more serious than the company could have caused.

To date, the damage caused to Crucitas, because of illegal and clandestine activities, is not linked directly to someone that can be held accountable, and those who raised their voices before to protect the environment, today remain silent to provide solutions.

The ignorance exemplified in Fabio is seen daily in those who paste stickers of “No more oil” in the bumper of their cars; in those who point out transgenics without knowing that a carrot should be white; and in those who, like Fabio, shares a #NoMoreMining with their computer or cell phone.

We have created a society in which all human activity generates an impact on the environment. However, the solution is not to eliminate those activities. On the contrary, investment is needed to create new technologies that help control, mitigate and compensate their impacts, and demand from those who profit from these activities to implement them.

If we really want to practice an effective environmentalism, we need to be aware of our impact as consumers. Because people with that level of consciousness are those who can reach solutions that really benefit the environment and our society.